In light of the tragic arson attack that occurred at Kyoto Animation, I’d like to honor the studio by writing a few blog posts about some of their best works. One of my personal favorites is A Silent Voice.

Koe No Katachi (A Silent Voice), also known as The Shape of Voice, remains one of my favorite anime films of all time for various reasons. The film has a unique and mature story, dwelling on topics often considered taboo in mainstream anime. The art is incredibly beautiful with a few artistic curve balls thrown in. The soundtrack is one of the best I’ve ever heard in a romance anime and the voice acting is superb. However, I feel like the film has been forgotten or wrongfully neglected by a lot of anime fans that would likely enjoy the film.

Koe No Katachi (A Silent Voice) is available on Amazon

To help or convince you fellow romance anime fans to watch Koe No Katachi, if you haven’t already, here are my 5 reasons why A Silent Voice is underappreciated.

The film has many great elements that come together to create an amazing anime experience. However, what I love most about it is its story. It is clear that the writers weren’t afraid to take chances. The film is gripping, heart-breaking, and covers topics that normally aren’t covered in most anime.

One of these topics is bullying. Of course, bullying is not a foreign topic to us and has been a hot topic in mainstream news as of late. However, in anime it is normally not covered in such detail. In A Silent Voice, the main character is an elementary school bully named Shoya.

The mean, hurtful, and even bloody aspects of his bullying are shown in detail and are enough to make you wince. To make it worse, Shoya’s main target is a deaf transfer student named Shoko who already struggles to live her life as normal children do. The way the bullying was portrayed was raw and unapologetic.

Perhaps the even more controversial or taboo topic in the film is teen suicide. In a country with one of the highest suicide rates in the world, it is not a topic a lot of people enjoy talking about or seeing portrayed on the big screen. In Koe No Katachi, suicide is at the focal point of the film and the driving force behind the events the unfold. This fearlessness in presenting mature and controversial themes sets A Silent Voice apart form a lot of mainstream anime out there.

Admittedly it could be because I love the film so much, but Koe No Katachi: A Silent Voice has one of the best anime soundtracks I’ve ever heard. Composed by Kensuke Ushio (Devilman Crybaby and Liz and the Blue Bird), the tone of the songs perfectly match the scenes and the main theme is hauntingly powerful.

Playing at both times of extreme sadness, happiness, and self-realization, the main theme song of A Silent Voice can create mixed feelings of joy and pain all at the same time.

While the film is called A Silent Voice, the voice actors in the film are far from silent in the excellent portrayals of their characters. The main voice actress Saori Hayami plays Shoko Nishimiya, a deaf girl who communicates through sign language and lip reading. Of course as a girl who was hearing impaired from a young age, Shoko has atypical speech patterns.  These speech patterns are not easily portrayed by non-deaf actors. Hayami gives an incredibly performance without being over the top or patronizing.

The male main lead, Shoya Ishida, is voiced by veteran voice actor Miyu Irino who has an impressive filmography including Makoto Shinkai’s The Garden of Words and Hayao Miyazaki’s Spirited Away. How do you portray a character who started as a bully and became the main target of bullying for the rest of his school life? How would someone who feels disconnected from society speak? Irino gives Shoya a soft and passive voice perfectly matching the character.

Koe No Katachi (A Silent Voice) is available on Amazon

Some films are strategically released in close proximity to other big-name films in order to piggyback off of the traffic the big name brings to the box office. However, this can easily backfire. Released around the same time as Kimi No Na Wa, Koe No Katachi was eclipsed by the success of Shinkai’s smash-hit film. After all, no matter how good your film is, it is hard to compete with the director that people are calling the next Hayao Miyazaki.

Koe No Katachi (A Silent Voice) Manga is available on Amazon

Koe No Katachi (A Silent Voice) uses bright and light colors with traditional 2D cel-shaded graphics. However, A Silent Voice is a prime example of anime that utilizes art style in inventive ways.

Shoya Ishida is a boy who is lost and purposefully chooses not to engage with the people around him. Aside from his immediate family members, everyone else in the film appears with a blue X on their face. As he slowly begins to allow himself to open up to the people around him, he begins to truly see them for who they are and thus the X on their face disappears. This device is used sparingly and at prime moments in the film that elicit powerful emotion in those watching.

Another great technique is the use of short snapshot flashbacks to illustrate Shoya’s memories and feelings throughout the film. The snapshots are concise and taken from memorable scenes in the film or Shoya’s own past. Instead of Shoya saying he is sorry or saying he knows is a bad son for giving his mother trouble, we are shown a snapshot of the blood running down Shoko’s arm, or his mother working hard at her hair salon. It is the perfect example of show don’t tell in storytelling. Have you ever watched a scene where a character is crying, but felt no urge to cry for them? That’s because if a character shows the emotion strongly on screen it is as if you no longer have to feel that emotion yourself because they are doing it for you. 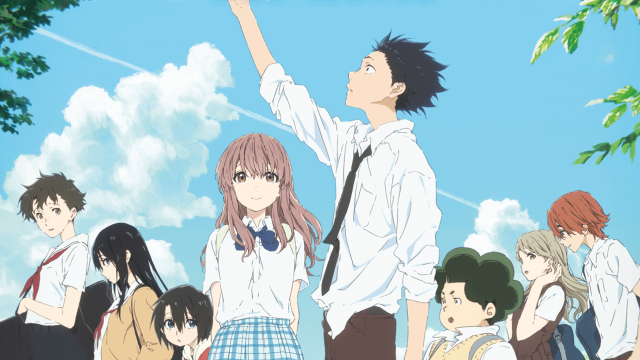 The best romance anime can make you cry without making the characters themselves cry in front of you. (Anohana is an exception because that last scene though…that last scene gave most of us irreversible PTSD)

While the film is currently available on Netflix Japan, I’ve decided to purchase the dvd and blu-ray of A Silent Voice in support of Kyoto Animation. If you’re interested in getting the manga, dvd, or blu-ray, here are a few links:

Above are just 5 reasons why Koe No Katachi (A Silent Voice) is an underappreciated anime. If you haven’t watched it yet, please do yourself a favor and set aside some time to enjoy one of the best films Kyoto Animation ever made. Have you seen Koe No Katachi? What do you think of the film? Let me and my readers know in the comments below!

You may have missed

5 Places to Watch Weathering With You Online

5 Places to Watch Kimi No Na Wa Online (Your Name)

5 Games to Help You Learn Japanese

5 Best Kids Anime that Every Adult Should Watch